Karan Johar is back with his much-awaited sequel of 2008 blockbuster ‘Dostana’ starring Priyanka Chopra, John Abraham and Abhishek Bachchan. Tarun Mansukhani was the director of the 2008 hit Dostana which was produced by Karan Johar, who will also be producing the upcoming ‘Dostana 2‘.

We will see Janhvi Kapoor, Kartik Aaryan and newcomer Lakshya in the lead roles for Dostana 2. The shooting for which begins today. 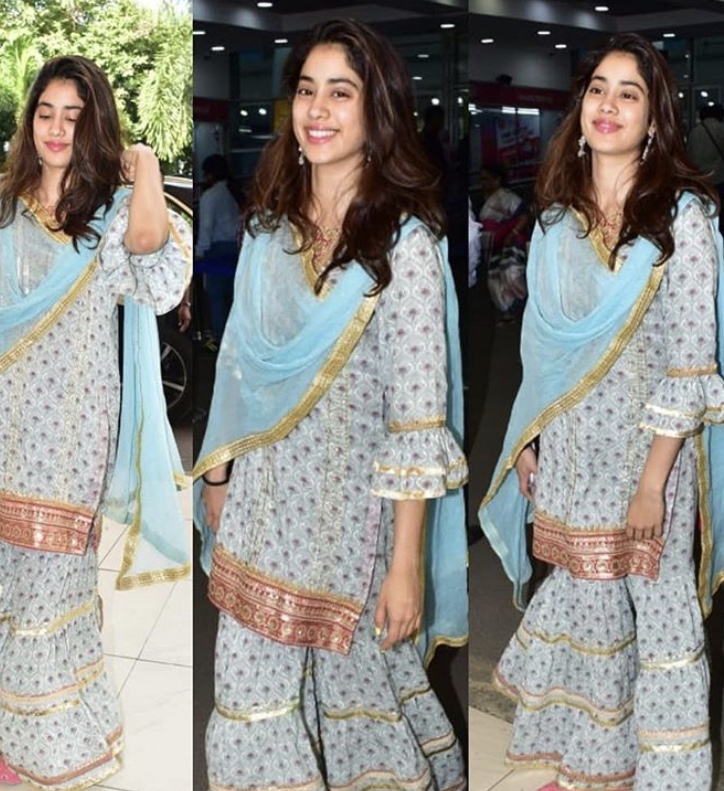 Janhvi Kapoor was seen leaving for Amritsar from Mumbai in a gorgeous blue sharara suit with ‘golden gotta patti’ work and a ‘fuscia pink jutti’. The casual ethnic look has over time become Janhvi’s favourite and ours too!

The actress was later snapped at the famous Golden Temple before starting the shoot of Dostana 2 where she went to seek divine blessings. Dostana 2 will be Janhvi’s second movie in the Bollywood industry, her first being the Ishant Khatter starer ‘Dhadak’ which came out in 2018.

Janhvi also took to her Instagram to share how she’s completely enjoying the Punjabi hospitality and was seen relishing a tall glass of Lassi! She also shared pictures of the serene and beautiful Golden Temple the peace and tranquillity of the place clearly reflected on Janhvi’s face.

It’s going to be really exciting to wait and watch the trio unfurl their magic on the big screen. Rumour has it that Janhvi Kapoor and Kartik Aaryan will be seen playing brother and sister in Dostana 2.

The team of the upcoming movie Dostana 2 were recently seen together at Karan Johar’s Dharma office for Lakshmi Pooja before Diwali. Kartik Aryan and Lakshya looked crisp in an off white kurta Pyjama whereas Janhvi stuck to her South Indian roots and was seen sporting a pink and green half saree just like her legendary mother Sri Devi. Don’t they all look just adorable together?